What role does food play in reducing inflammation?

Inflammation can be a good thing. It is a natural process that helps your body heal and defend itself from harm. However, chronic inflammation is also one of the root causes of many diseases. It may drive obesity, type 2 diabetes, heart disease, and depression and contribute to all sorts of serious health problems from osteoarthritis and rheumatoid arthritis to some cancers. In this article, we introduce the science and research behind the role of nutrition in the cause, prevention and treatment of inflammatory disease.

Everyone has experienced the remarkable phenomenon of acute inflammation – a sprained ankle, splinter, or cut – and as a result have witnessed the affected area turn red, puffy and hot as your immune system rushes to your aid to assess the injury and fight any pathogen that might have entered your body.

A normal, healthy inflammatory response should flare up and die down again a short time later, as the healing process resolves the inflammation, the injury heals and homeostasis returns.  Pain and inflammation should not be long term; they should go away – but sometimes inflammation runs wild, becomes chronic and last for a long time. Constant inflammation may damage tissue, affect organ function and lead to a dysregulated immune system and serious health conditions. 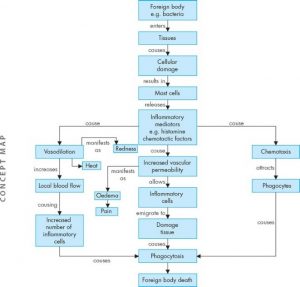 Say you cut a finger, then bacteria enters the body and causes tissue and cellular damage. This foreign body triggers mast cells to release inflammatory mediators such as histamine and cytokines leading to the classic signs of inflammation – redness, heat, swelling and pain.

Next, the release of these mediators triggers inflammatory cells, such as white blood cells neutrophils and lymphocytes, to move to the injury, release other substances and start the immune response.

As inflammation continues, cells called macrophages remove damaged cells or tissue and if the injury in eliminated the next phase is tissue repair.

Resolution is the solution.

The death of neutrophils is the hallmark of the move to the resolution phase of inflammation. Resolution is triggered when neutrophils and macrophages secrete chemical messengers known as specialised pro-resolving mediators (SPMs). These SPMs are derived from polyunsaturated fatty acids (PUFA’s), including the essential omega-3 and -6 fatty acids. One group of SPM’s, lipoxins, is derived from Omega -6 arachidonic acid, while the SPM groups, resolvins, protectins and maresins, from Omega -3 EPA or DHA.

The interesting thing is that evidence suggests people eating a Westernised diet are getting adequate arachidonic acid for lipoxin synthesis but insufficient intake EPA/DHA for resolvin, protectin and maresin synthesis. Hence omega-3 fatty acids such as those found in oily fish are vital to resolving inflammation.

Certain lifestyle factors can promote inflammation, especially when they occur on a regular basis, such as:

These drivers lead to five key biochemical inducers of inflammation including

How can we reduce inflammation through diet? 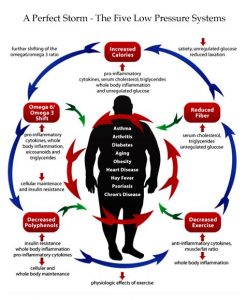 The Mediterranean diet and inflammation

Research findings indicate that eating a diet focused on anti-inflammatory principles such as The Mediterranean Diet, not only helps protect against certain diseases, but also slows the ageing process by stabilising blood sugar and increasing metabolism. 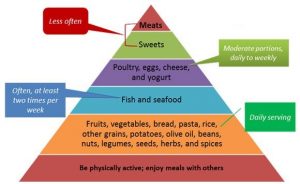 Traditional diet in olive-growing areas of Crete, Greece and southern Italy in the late 1950s and early 1960s showed positive effects on inflammation and disease such as CVD.

Although this article has only touched the surface on the role diet and nutrition play in the cause, prevention and treatment of inflammatory diseases, it is clear that;

Estruch, Ramon. “Anti-inflammatory effects of the Mediterranean diet: the experience of the PREDIMED study.” Proceedings of the Nutrition Society 69, no. 03 (2010): 333-340.