Bone Broth – Top reasons to add to your family’s diet? 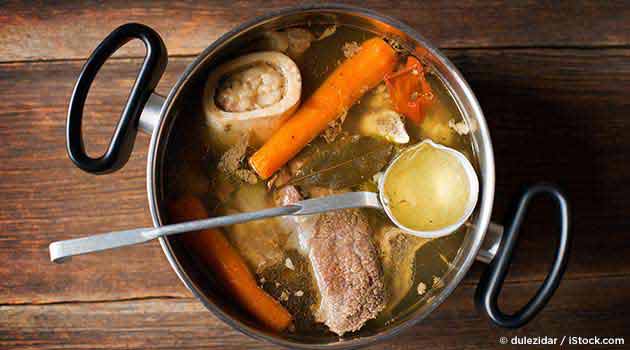 If you aren’t already making bone broth regularly, I’d encourage you to start today! It is an incredibly healthy and very inexpensive addition to any diet and the homemade versions beat store-bought broth in both taste and nutrition. This is the one nutrient rich food that anyone can afford to add!

Broth (or technically, stock) is a mineral rich infusion made by boiling bones of healthy animals with vegetables, herbs and spices. You’ll find a large stockpot of broth/stock simmering in the kitchen of almost every 5-star restaurant for its great culinary uses and unparalleled flavour, but it is also a powerful health tonic that you can easily add to your family’s diet.

Broth is a traditional food that your grandmother likely made often (and if not, your great-grandmother definitely did). Many societies around the world still consume broth regularly as it is a cheap and highly nutrient dense food.

Besides its amazing taste and culinary uses, broth is an excellent source of minerals and is known to boost the immune system (chicken soup when you are sick anyone?) and improve digestion. Its high calcium, magnesium, and phosphorus content make it great for bone and teeth health.  Bone broth also supports joints, hair, skin, and nails due to its high collagen content.

It can be made from the bones of beef, bison, lamb, poultry, or fish, and vegetables and spices are often added. BUT always make sure you use bones from a chemical free carcass – you don’t want growth hormones etc in your broth!

It has many benefits including improving digestion, allergies, immune health, brain health, and much more.

Broth is also helpful to have on hand when anyone in the family gets sick as it can be a soothing and immune boosting drink during illness, even if the person doesn’t feel like eating.

Seven reasons to make bone broth a part of your diet:

2) It’s therapeutic for joints because it’s an excellent source of glucosamine and chondroitin, two of the more commonly self-prescribed supplements Why pop another pill when you can get greater benefit from a real food?

4) Bone broth is powerfully healing for the digestive system. This is in part due to its high content of gelatin, which helps to ease the digestion of cooked foods. Also, the nutrients in broth help to heal the lining of the digestive tract – one of the many reasons why it’s a foundational food in the increasingly popular therapeutic GAPS diet.

5) Because it’s an excellent source of the amino acids arginine and glycine, broth reduces your need for protein. It is what we call “protein-sparing,” which means your body can make better use of the protein you do eat, thus not needing to eat as much.

6)It’s extremely economical. Bone broth is an excellent example of how affordable it can be to eat healthily – it reduces your need for protein, which means you don’t need to eat as much meat and it makes full use of the meat you do consume – all those bones and joints and bits and pieces we normally toss in the garbage are transformed into this nutrient-dense wonder.

7) It makes food taste really, really good. Any soup, stew, or sauce made from a base of homemade broth is a very different thing from that made from broth out of a can or box.

What Kind of Broth?

Homemade, nutrient dense bone broth is incredibly easy and inexpensive to make. There is no comparison to the store-bought versions which often contain MSG or other chemicals and which lack gelatin and some of the other health-boosting properties of homemade broth.

In selecting the bones for broth, look for high-quality bones from grass fed cattle, organic poultry, or wild caught fish. Since you’ll be extracting the minerals and drinking them in concentrated form, you want to make sure that the animal was as healthy as possible.

There are several places to find good bones for stock:

You’ll also need a large stock pot to cook the broth in and a strainer to remove the pieces when it is done.

The first step in preparing to make broth is to gather high-quality bones. As I said, you can find them from sources listed above or save them when you cook. Since we roast chicken at least once a week, I save the carcass for making broth/stock.

You’ll also need some organic vegetables for flavour. These are actually optional but add extra flavour and nutrition.

If you are using raw bones, especially beef bones, it improves flavour to roast them in the oven first. Place them in a roasting pan and roast for 30 minutes at 350.

Then, place the bones in a large stock pot. Pour (filtered) water over the bones and add the vinegar. Let sit for 20-30 minutes in the cool water. The acid helps make the nutrients in the bones more available.

Rough chop and add the vegetables (except the parsley and garlic, if using) to the pot. Add any salt, pepper, spices, or herbs, if using.

Now, bring the broth to a boil. Once it has reached a vigorous boil, reduce to a simmer and simmer until done. These are the times I simmer for:

During the first few hours of simmering, you’ll need to remove the impurities that float to the surface. A frothy/foamy layer will form and it can be easily scooped off with a big spoon. Throw this part away. I typically check it every 20 minutes for the first 2 hours to remove this. Grass-fed and healthy animals will produce much less of this than conventional animals.

During the last 30 minutes, add the garlic and parsley, if using.

Remove from heat and let cool slightly. Strain using a fine metal strainer to remove all the bits of bone and vegetable. When cool enough, store in a gallon size glass jar in the fridge for up to 5 days, or freeze for later use.

How to Use Bone Broth

Homemade Broth/Stock can be used as the liquid in making soups, stews, gravies, sauces, and reductions. It can also be used to saute or roast vegetables.

Especially in the fall and winter, we try to drink at least 1 cup per person per day as a health boost. My favourite way is to heat 8-16 ounces with a little salt and sometimes whisk in an egg until cooked (makes a soup like egg-drop soup).

In times of illness (which doesn’t happen often) we will usually just drink bone broth until we start feeling better as it supports the body but is very easy to digest so the body’s energy can go to healing. In cases of stomach bugs or vomiting, bone broth often calms the stomach very quickly and helps shorten the duration of the illness.